6/17/2017 – For Father’s Day we went shopping to Allied Kenco, then the Farmers Market on Airline, and then B&W Meat Market on No. Shephard. Bought a 1.1 lb. Sirloin Strip Steak for $13.98/lb to try my first sous vide in an ice chest. All went fine but did not end as planned. 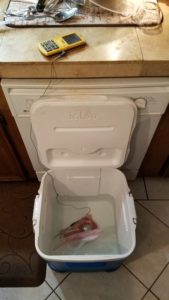 Using the small Igloo Cube–with injected foam insulation in the lid–added hot tap water (~148 degrees) to the cooler up to about 4″ deep then used not-so-hot water to cool it down to ~130. Placed the ChefWorks thermometer probe in the bottom and set the alarms to 128 and 135. Put the steak in a 1-gallon ziplock and used the water to squeeze out the air in the bag.

For the first 30 minutes I had to add hot tap water every 5-10 minutes to keep it in the range but soon the Igloo became half full so the hot tap water did not make much difference. Heated a large pot of water on the stove to boiling and with a 1-quart pot dipped and poured hot water into the chest. That brought the temp back into range quickly.

By the end of the first hour, the adjustments were maybe 15 minutes apart and only required dipping the very hot water from the big stock pot. The ziplock had begun leaking and maybe a cup of water was in the bag that I poured out once and again at the end.

The girls arrived and stayed until 8 PM. By that time the steak has been in the water for 3 hours and the charcoal has burned out to the point there is not enough heat to grill the steak. Finished it on the cast iron grill on the stove and ate about 8:30 PM.

The steak was tender and light pink across the entire thickness other than at the edges where the grill and griddle had seared it. Given the long time in the water and the short time on the grill I was surprised it was still pink.

For the first time to SV something, and using such a simple set up, and company staying an hour longer that expected, it turned out good.

Next Time – Add the hottest tap water, close and let the chest warm up before adjusting to cook temp and adding the meat. Vac seal the bag or better clip or hang the zip part above the water.  After getting it to temp adjust up using boiling water so the chest does not get so deep.